Who needs Las Vegas when you have Bris-Vegas?! 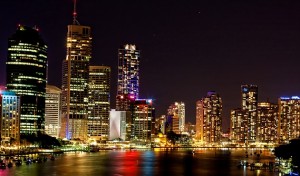 Brisbane often cops a bit of flak for being a ‘sleepy city’. Sure, our CBD is fairly tiny when compared to the likes of New York, London and Tokyo, and the stereotype about laid-back Queenslanders may be true, but that don’t mean we can’t rock it when we want to.

Beneath the superficial image of a sun-soaked, chilled-out, little tiny city is a world full of glitz and glamour. That is, if you know where to look. After all, they don’t call it ‘Bris-Vegas’ for nothing.

Firstly, we have a pretty rockin’ casino. Originally designed as offices for government officials and to house treasury records, the initial building was constructed in 1889. The architect, a man by the name of John James Clark, won his position by submitting his design to the colonial Queensland government as part of a competition. The design, which has been described as “Classical Revival style, with facades having a mix of Ionic, Doric and Corinthian columns”, was an enormous success and Clark shot to fame as one of the best architects of his time. The silly man obviously couldn’t see that he was currently living in one of the best cities in the world, and, shortly after the completion of the building, he moved to Melbourne to take a job.

Moving on, the Treasury building kept growing, and was expanded upon in two more stages up until 1961 as the building we now recognise today. In 1990s, the Government decided the building was no longer suitable for them to use and proposed to convert it into a casino. Despite some initial objections, the building was successfully converted and Clark’s work stands before us at the end of Queen St mall for all of Brisbane to admire.

The second reason for Bris-Vegas’ awesomeness is the amount of celebrities who started out as humble Brisbane kids. Few people know that Miranda Otto, who played Eowyn from the Lord of the Rings films (you know, the chick who has the awesome line screaming “I am no man!”), was born and raised in our little sunshine city. As was Stephanie Rice, who attended Clayfield College in her youth. Darren Hayes, a pop music sensation in the early 2000s as one half of Savage Garden and as a solo artist, is also a notable Brissy-kid who went to school in Slack’s Creek. And who could forget Hollywood heart-throb Lincoln Lewis, who is best known for his roles in Home And Away and House Husbands, grew up in Brisbane?! 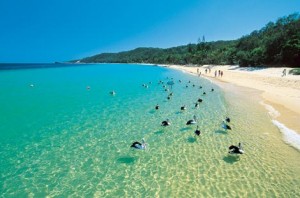 Thirdly, we’ve got a truck-ton of awesome islands where Brisbane’s highest-maintenance can go ‘glamping’ – that is, glamour camping. That’s right, we’re so glamorous around here that all of our idyllic little islands are actually catering to the glamour campers. Moreton and Stradbroke islands are the best known, as they possess all those beautiful qualities usually looked for when choosing a paradise getaway; white sand, clear blue waters and bright green palm trees.

There’s opportunities to feed dolphins on Moreton, or to learn to surf in Straddie. But best yet, there’s no reason to sleep on the hard campsite ground, or to fight about the right way to put up the tent. Semi-permanent canvas tents dot the campgrounds on these two islands, and usually come furnished with a nice, soft bed and a private bathroom so you don’t have to wear your thongs in the shower. Cheeky shout-out to Sydneysiders and Melbournites here; where do you guys go on holidays? We go to paradise, and there’s queen beds there waiting for us.

Okay, so it’s obvious that I’m coming from a slightly biased background. I adore Brisbane, and all its funny little quirks. I mean, we’ve installed a beach in the middle of the city – it is entirely possible (and entirely acceptable) to wear a bikini through the CBD! And the food here is actually amazing too – everything from North African to Cambodian to South American cuisine is not only available, it’s completely tasty too.

But don’t tell me we can’t be glamorous too. Because we can be anything we damn well want to be. And there’s not many other places in the world where that is true.

Get Insider Real Estate tips and strategies for greater Brisbane and the surrounding area.

INTERESTED IN A BUYER'S AGENT BUT
DON'T KNOW WHERE TO START?

find me a property

We'll only send you awesome stuff

Your 5 Super Buying Strategies Guide is on the way!

We're delivering your 5 Super Buying Strategies Guide to the email you specified. Please allow 5 to 10 minutes for it to arrive to your inbox.